TRIBUTES have poured in from the rugby community following the sudden death of Borders teenager Harris Macdonell last Wednesday.

A regular in Selkirk Rugby Club’s ‘A’ XV, the 19-year-old from Lilliesleaf had been back training alongside his team-mates at Philiphaugh since rugby activities resumed at the club three weeks ago.

Selkirk head coach Scott Wight said the young player would be greatly missed. “Harris was someone everyone got on with, and he always had bags of enthusiasm, hardly ever missing a training session.

“His passing has come as a massive shock, which I honestly don’t think has sunk in yet with some of our players. He was one of us, and his absence is going to be keenly felt.”

Selkirk Rugby Club’s chairman, Dennis Henderson, said: “The affection in which Harris was held is reflected by the huge number of tributes which have paid to him on social media by team-mates and supporters.

“He was a popular figure at the club, and his tragic loss has been deeply felt by everyone at Philiphaugh. The club’s thoughts are very much with his family at this difficult time.”

Messages of condolence have been received from both Scottish Rugby and Edinburgh Rugby, as well as from a host of other rugby clubs, including Hawick, Melrose and Kelso in the Borders, and from Stewart’s/Melville, Currie Chieftains, Highland and Glasgow Hawks in the wider rugby community.

“Harris had always been a bit of an individual,” said Mr Marshall, “and I think this individuality and his unfailing politeness and cheerfulness couldn’t help but make you like him.

“There was also a vulnerability there, and although he faced challenges to find his niche, he had massive family support.

“Harris was very much his own man, and his likeability meant people would always want to help.

“He was always committed about his work at school, and particularly about his rugby.

“When it came to tackling, it often seemed Harris had made more tackles during a game than the rest of the team put together.”

A fast-running wing threequarter, after leaving school Harris turned out for Selkirk Youth Club, having started his rugby-playing days in the Selkirk Rhinos mini-rugby section.

Harris’s sporting talents weren’t confined to the rugby field. He turned out for St Boswells Cricket Club, and attended tennis coaching with well-known local coach Ian Reilly from his early years at St Boswells and then Melrose Waverley Tennis Club.

“He was a talented player,” said Mr Reilly, “a lefty with his own unique style and a character on and off court, representing Melrose at junior and senior level in the Border Leagues.

“He was a quiet but very popular member of club and will be sorely missed by all who knew him. I am shocked at the news and will miss Harris greatly.”

In addition Harris was an accomplished accordion player, having being tutored by renowned Borders music teacher Iain Lowthian. “I first began taking Harris for lessons on the piano accordion when he was in P6,” said Mr Lowthian, “and it was apparent even then he had a natural talent.

“He went on to achieve an ‘A’ grade in his Higher Music exam, and was always determined to play at full dance tempo, which he duly achieved. He also produced some delightful compositions.” While at school, he also took part in the Duke of Edinburgh Award Scheme.

Harris is survived by his parents Dave and Jane, older sister Katie and younger brothers Patrick and Robbie, to whom deepest sympathies are extended. 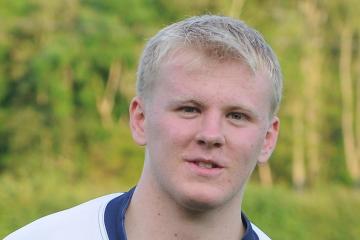 ONE of Britain’s leading army officers in recent times has been convicted of a drink-driving offence while on a fishing expedition in the Borders. Border Telegraph | News…

AN APPEAL has been launched after cash was stolen from a Borders church. Border Telegraph | News…

A BLACK Audi S3 has been stolen from a car dealership in the Borders, according to police. Border Telegraph | News…

PUPILS at a Peeblesshire school are self-isolating after cases of coronavirus were recorded, it has been announced. Border Telegraph | News…

A MAN has been charged in connection with two handbag thefts in the Borders. Border Telegraph | News…