Weigh Greener in Lauder offers customers the chance to cut down on single-use plastic by refilling old jars and containers with a range of products.

One side of the West High Street shop is dedicated to food, including cereals, flour, pasta and rice – then on the opposite wall there are products designed to help at the home, whether with cleaning or haircare.

“The response from the local community has been really fantastic,” said Charlotte Aitchison, founder of the not-for-profit shop which opened in March.

“Some of our customers are new to zero waste, some have really wanted a zero waste shop where they’ve seen them opening online in other places.” 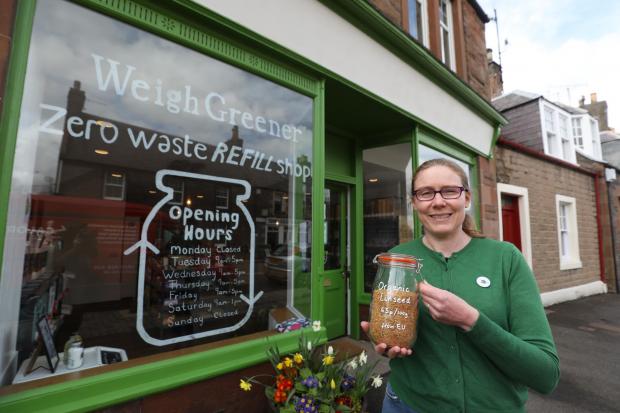 Charlotte says she’s always had a passion for the environment and was inspired to open Weigh Greener as she had always wanted to shop with an eco-friendly focus.

Businesses which offer shoppers the chance to reduce their plastic waste are often found in larger cities such as Edinburgh. Charlotte says customers have told her how happy they are now to have the same opportunities in the Borders.

“A lot of people come in and they’re just really excited that a shop like ours has opened locally because most of the shops that are purpose-built in this way are in Edinburgh,” Charlotte said.

“So they’re really excited that there is a shop close by that they can get to – that there’s a zero waste shop in their area.

“I think a lot of people before the pandemic worked in Edinburgh so would have had access to zero waste shops in Edinburgh but people aren’t travelling into Edinburgh anymore.”

Some of the non-food products in the shop. Photo credit: Helen Barrington

As well as helping to cut back on the amount of single-use plastics we take home, Weigh Greener can also help customers to reduce their food waste.

Charlotte explained: “For some people, they’ve had their families and they’re now older and they live on their own, they don’t want to have to buy a kilo of flour or a kilo of pasta, they want to come in and buy what they need for that week.

“Especially if they’re on a budget.”

National Geographic says a “reduction in manufacturing of unnecessary single-use plastics” will help curb the amount of plastic in our environment.

In the Borders, a total of 42,000 tonnes of waste is produced each year.

Rather than going to landfill, general waste from the region is taken to a Waste Transfer Station in West Lothian where it is separated and converted into fuel for heat and electricity.

Recyclable waste in the Borders is transferred to a material recycling facility in Hartlepool to be separated and baled.

The material then goes to a reprocessor for recycling in the UK or abroad.