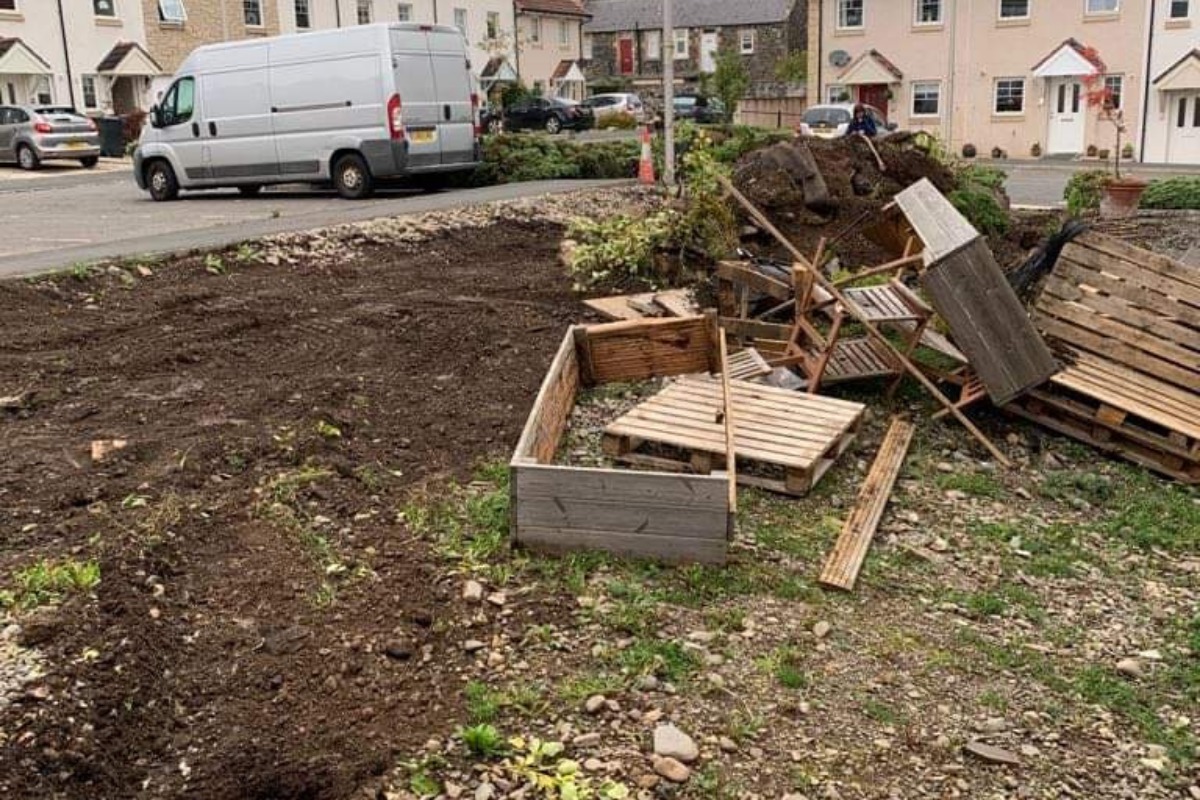 THE destruction of a recreational area in the Borders has been “shocking and very disturbing” for residents, says a Tweeddale councillor.

But Heather Anderson, of the SNP, says that there was no illegality in the developer removing the communal garden in Peebles as he owns the land.

The developer had wanted to build two houses on the ground, but Scottish Borders Council rejected the plans as it had been earmarked for a play/recreational area.

The landowner appealed to the Scottish Government, but by the time an official visited, residents of Ballantyne Place had added slabs, shrubs and trees to the space.

However, a bulldozer was used to remove the community’s additions earlier this month, leaving everything in “a big pile”.

READ MORE: Borderers urged by council to prepare for ‘heavy and persistent’ rainfall

“Because the owner owns that site, there was no illegality in him displacing the landscaping,” said Ms Anderson, who confirmed that she had approached council officers to see what action could be taken.

“I also got officers to check whether the site was safe for the public, and they assured me that it was safe, but it was still a slightly shocking event that was captured on camera.”

The Tweeddale West representative added: “What we now have to try and do is ensure that the residents of Ballantyne Place and that owner hopefully navigate a mutually agreeable solution to how to use that piece of land.”

The space had been used as an area for households to come together to enjoy barbecues.

One resident, who does not want to be named, told the Peeblesshire News: “We set about clearing it from all the rubble and weeds. A good amount of people in the street got together and helped out. We got slabs, sand, shrubs and trees, which were donated by a local gardener. We thought we’d make it presentable and nice.

“We knew about the planning application, but none of us thought houses should be built on it. The key thing is, this is the only bit that is left for a recreational area. We’ve hosted various things on this space, including the kids doing a magic show and raising money for charity.”

The homeowner said that residents in Ballantyne Place “had a fear” that their communal garden would be “destroyed”.

“They’ve uprooted trees and dumped them,” said the resident. “Everything has just been left in a big pile. Everyone is just gutted and upset – we had big plans for the space. It really brought us together, and the sad thing now is, there’s nothing there now.”

The original development was granted planning permission on the basis that a play/recreation area should be installed.

However, when the land was sold to the current developer, he lodged an application to build two houses on the ground.

That was subsequently rejected by the council.

The developer’s appeal was thrown out by the Scottish Government reporter who said the requirement for a play area should be protected, and this piece of land is the only place it could be located.

The Peeblesshire News contacted the developer but had not received a response at the time of going to press.

A LONG-RUNNING planning bid to convert a former coach house in the Borders into a family home has been resolved after approval was granted. Border Telegraph | News…

A BORDERS nursery has been forced to temporarily close, following a “probable outbreak of E.coli O157”. Border Telegraph | News…