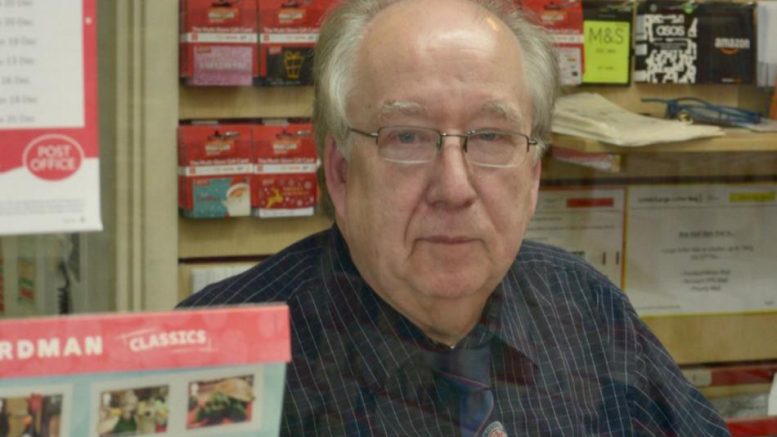 AT the busiest period of the post office year “a perfect storm” of strikes, rising costs and regulations are hitting the business, according to the Peebles sub-postmaster.

Ian Carruthers, who is self-employed, took over the franchise at the Eastgate in 1996 and says there have been hard times in the past but they do not compare with today.

The 67-year-old told us: “We are approaching a perfect storm.

“First and foremost the energy relief scheme that the government is doing is only valid until March.

“We need them to extend that for the industries that are vital to the economy and quite obviously everyone will tell you, politicians and councillors, post offices are a vital part of the local community.”

Mr Carruthers, who rents the property, added: “I pay a service charge every month to the landlord for the lighting, water and heating.

“They work a year behind with the bills and I just had an extra bill for the year 2020/21 asking for another £960, that is before the cost of electricity has gone up to them.

Some business has decreased due to certain courier firms using shops as drop off and collection points.

Mr Carruthers said: “We are encouraging the Post Office Ltd to go to the couriers to become an agent of these carriers.

“We have an Amazon hub here, we can do DPD and DHL is coming on stream.

“How quickly we will get the business, I don’t know, but with the strikes looming this is increasing.”

Mr Carruthers said that the strikes have caused a 15 to 20 per cent reduction in mails and hence the same reduction on what he is paid by Post Office Ltd.

“A 95p stamp gives me about 2.5p profit,” he said. “ We get paid for all the mail in, more for priority work, time for work and mails’ acceptance.”

When Mr Carruthers took on the franchise there were two other post offices in Peebles one in Rosetta Road and the other, which shut this year, in Glen Road.

He and his wife often put in seven-day weeks with other work such as buying the goods which the post office also sells.

He is also concerned about new rules which tell banks that they need to be stricter on money laundering.

Mr Carruthers added: “The banks are telling the customers that they can only bank a certain amount each month and year at a post office. It is more the small businesses that are affected.

“RBS has been shut many days in the past few months and the customers have been coming here.”

Some things have picked up since the COVID lockdowns ended, such as foreign currency transactions.

However, the business rates which were frozen during the pandemic, have been reapplied.

Mr Carruthers said he is worried about the rates revaluation in March as he currently pays more than £10,000 per annum and he has been told the rise could be more than 50 per cent.

“These are all things that are impacting the pay that sub-postmasters have,” said Mr Carruthers. “This is through the whole of the UK. It is not just in Peebles or Scotland.

“I have a very loyal customer base but it’s coming to a perfect storm next year.”

The Liberal Democrat representative for Tweeddale West said: “I met sub-postmaster Ian Carruthers and was worried to hear that a combination of increased costs and clumsy regulation change is threatening the financial stability of Peebles post office.

“The post office is a key asset on our high street and provides significant social support to local people.”